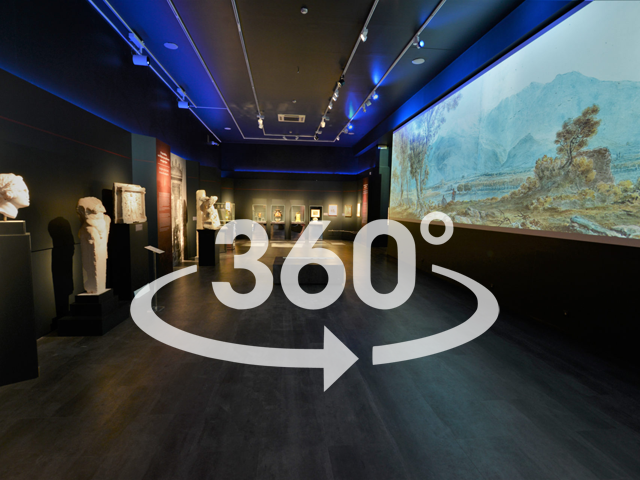 The well-known quote of the general, Ioannis Makrygiannis, is given precedence in the title of the exhibition, since the struggle for freedom was embedded not only in the demand of the Greek people for independence, but also in their historical rights over the unrivaled works of the ancient ancestors.

Twenty-six selected  antiquities (22 marble sculptures and reliefs, 2 clay vases, 2 bronze figurines) from the collections of the National Archaeological Museum are showcased in an eclectic «dialogue» with twenty-six recent works of the 18th and  19th century, most of them by  European artists: 8 paintings (oil and water color ones), 11 austere engravings, 4 illustrated editions and 3 artifacts of decorative art, temporary loans from the Library and Art Collection of the Hellenic Parliament, the National Historical Museum, Benaki Museum, Museum of the City of Athens – Vouros-Eutaxia Foundation, National Gallery – Alexandros Soutsos Museum, Stephan Adler Collection, as well as the Michalis and Dimitra Varkaraki Collection.

In the first part of the exhibition, information and documents are presented regarding the preceding revolutionary movements of the 17th and 18th century, as well as the ideological preparation of the struggle, in which references to the ancient past and historical continuity of the nation were constantly made.  There are on display works related to the great Greek enlighteners, Adamantios Korais and Rhigas Pheraios or Velestinlis, along with characteristic publications that marked the beginning of the philhellenic interest, while the antiquities that feature in this exhibition unit represent distinct iconographic prototypes, similar to those that inspired the rendering of enslaved Greece.

The second part comments on the phenomenon of the plundering of antiquities, as one of the aspects in which the fascination with ancient works influenced the acquaintance of the West with Greek antiquity in the pre-revolutionary period, something though that had a disastrous impact on the integrity of the monuments. The visitor will come across some of the fragments that were left behind following the looting of the ancient monuments on the Acropolis of Athens,  the treasury of Atreus at Mycenae, the temple of Aphaia on Aegina and the temple of Apollo Epikourios at Bassae of Arcadia, acts of pillage that contributed to the realization by the Greek people of the significance  that antiquities held in the context of their collective identity.

The third part deals with the phenomenon of philhellenism, which in the effort to raise awareness in the European public opinion, promoted in the art visual references and pictorial motifs of the ancient world. Decorative artifacts that were circulated in the philhellenic parlors and drew their inspiration from the figures of ancient warriors, as well as the presentation of the important, in terms of recording ancient monuments, activity of the French Research Expedition to Morea, stand among the characteristic exhibits.

The fourth part charts the care the Greeks took, already from the revolutionary period, to set up institutions that would safeguard and protect the ancient monuments, pursuing further study of the ancient Greek civilization. Specimens from the first collections and excavations that were carried out after the founding of the new Greek state are showcased in this unit.

The exhibition reaches its completion with the divine figure of Nike (Victory), emblematic symbol of the successful struggle. Ancient winged Nikai will also transcend the upcoming anniversary activities of the Museum, carrying into the present powerful symbolisms and messages about all those that motivate and inspire the human being.

The exhibition is enhanced by digital projections that feature landscapes of pre-revolutionary Greece, accompanied by a text of Chateaubriand, an ardent supporter of the Greek cause, who in a lively manner remarks upon the harmonious relationship of the natural landscape with antiquities.