The Geometric art spans the period from the late 11th to the 8th century BC and is characterized by exquisite examples of bronze metalwork. Art was influenced to a large extent by the Homeric Epics. Small-scale sculpture was dominated by the ideal type of the warrior-hero, the charioteer and the horse that symbolized social and political power. The works, which were rather unskilfully rendered at first, are marked by austerity, plainness, tectonic forms, schematization and clear-cut contours. In the course of time and as art evolved, the attributes of the figures were depicted and often different styles and workshops were distinguished that each one (Corinthian, Argive, Laconian, Attic) introduced special features. A case in point is the horse figurines, often depicted resting on pierced or solid bases, which are often found as votive offerings dedicated by pilgrims to the sanctuaries of the time. Of particular interest are the compositions that gradually emerged, such as figures arranged together suggesting a circular (kyklios) dance, groups of animals etc.

A wide variety of metal jewels were produced, mainly pendants (suspended pieces of jewellery), fibulae (metal fastenings), often decorated with incised representations, pins and pselia (bracelets). The “Macedonian bronzes” that date between the 8th and the 7th c. BC constituted a special group and involved mainly jewels. They were usually produced in workshops of Macedonia, central and southern Greece and share resemblance with each other and works of the Villanovan culture in Northern Italy.

Apart from the small works that have been recovered as grave goods in tombs and as votive offerings to sanctuaries, from the 9th c. BC onwards large bronze tripod cauldrons were dedicated to places of worship. Their circular handles and rim are decorated with male nude figurines and also figurines of warriors, charioteers and animals, particularly horses. These vessels rest on three tall legs ornamented with geometric motifs.

In Mainland Greece the Geometric style prevailed unvaryingly until the late 8th c. BC. Crete constitutes a unique case because of the uninterrupted continuity of metalworking throughout the transition from the Bronze to the Iron Age and the strong ties with the East. 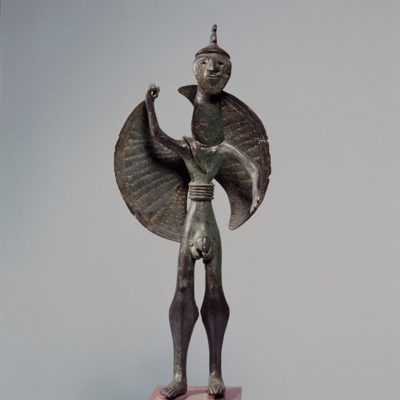 During the Hellenistic period, namely from the late 4th c. to 31 BC the arts and culture flourished in the […]
Newsletter sign-up