The term Archaic was coined in the 18th century by art historians in order to describe the transition of the Greek art between the Geometric (9th-8th century BC) and the Classical Period (5th-4th century BC). The Archaic Period covered roughly a time span from the 7th to the 6th century BC (700-500 BC). The end of the Persian Wars (479 BC) signalled the passage to the ensuing Classical period.

The term Archaic was originally imbued with evaluative content and was considered as the “”primitive”” prelude to the great Classical art, with reference to sculpture mainly. Today, the term holds chronological significance only and refers to the major political, social, economic and artistic transformation of the Greek world during the 7th and the 6th century BC.
The rapid population growth during the 8th century BC and the need to procure more resources led to the disintegration of the social stratification by race or tribe. This resulted, on the one hand, in the widespread expansion of the Greek trade across the entire Mediterranean and, on the other, in the birth of the city-state that emerged as the core ingredient of the political and civic organization in ancient Greece which entailed aristocracy, oligarchy or tyranny as systems of government. Moreover, with the aid of legislators, laws were introduced that contributed to a more effective and fairer administration of the city-states and attempted to resolve the continuous disputes between them
The institution of the Panhellenic games at Olympia already since the 8th century BC (Olympic Games, 776 BC), at Delphi (Pythian Games, 590 BC), at Isthmia (Isthmian Games, 582 BC) and at Nemea (Nemean Games, 573 BC), numerous local festivals, with the Panathenaea (Athens 566 BC) being the most celebrated event, and also the formation of religious – political confederations, the Amphyctionies (Delphi, Panionium), played a pivotal role in the reinforcement of the relations between the city-states.
In the urban as well as the religious centres, city-states and their tyrants, such as Peisistratus in Athens and Polycrates on Samos competed with each other in the establishment of imposing edifices and the implementation of public building programmes.
The rapid growth of trade, particularly with the East, and the colonization, namely the foundation of colonies and trading stations across the Mediterranean coasts, resulted in the widespread use of the alphabet (it had already been imported in the 8th century BC by the Phoenicians) and coinage that had been invented by the Lydians in order to facilitate trade relations.
The adaptation of the alphabet to the Greek dialects, apart from serving commercial purposes, led to the dissemination of writing, with the documentation of the Homeric epics, the emergence of lyric poetry, the first attempt to record history systematically (logographers) and the endeavour to comprehend the Cosmos (Ionian natural philosophers).
The encounter of the Greeks with the eastern civilizations enriched the Greek art with new expressive means. During the 7th century BC (Orientalizing period) the Greeks adopted Egyptian and eastern iconographic themes and styles of decoration (kouroi, mythological creatures, such as griffins, sphinxes) adjusted to their own artistic flair. The earliest phase of the Archaic sculpture (Daedalic) is marked by frontality and the disproportionate rendering of body parts; however, a tendency towards a more naturalistic mode of representation gradually prevailed, thereby satisfying, with the so-called “”latent movement”” one of the fundamental questions of ancient Greek art, the “”ζωτικόν φαίνεσθαι”” (of works of art, true to life), namely the need to make a sculpture look as though it actually lives and moves.
Among the pottery workshops of the 7th century BC predominate the Corinthian (Protocorinthian pottery) and the rather conservative Attic workshop (Protoattic pottery). The black-figure style, namely the decoration of vases with black figures and incisions for rendering details first appeared in Corinth (7th century BC) and later at Athens (circa 620 BC). The Corinthian ceramic ware dominated the markets across the Mediterranean until the early decades of the 6th century BC, a time in which it was gradually superseded by the Attic black-figure vases, of higher quality, that were decorated by great painters, such as the Nessos Painter, Sophilos, Lydos, Amasis and Exekias.
In around 530/520 BC the red-figure style in pottery was invented, in which the figures are set against a black background retaining the reddish colour of the clay. The most significant painters are the Andokides Painter, and the “”Pioneer Group”” that consisted of Euphronios, Euthymides and Phintias. 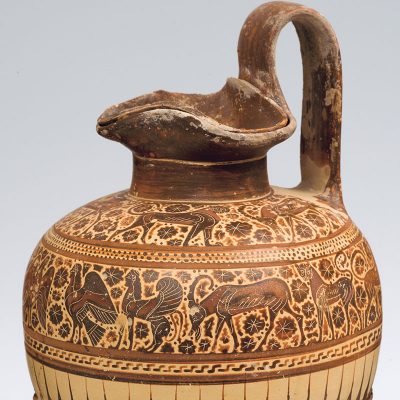 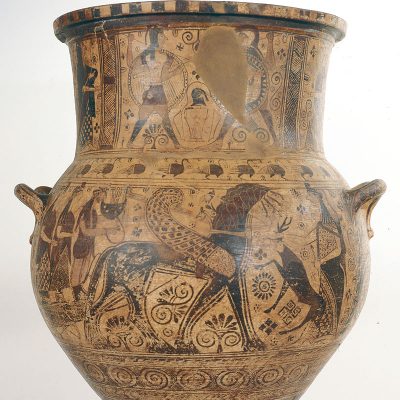 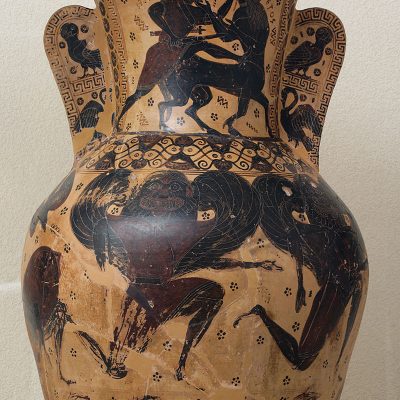 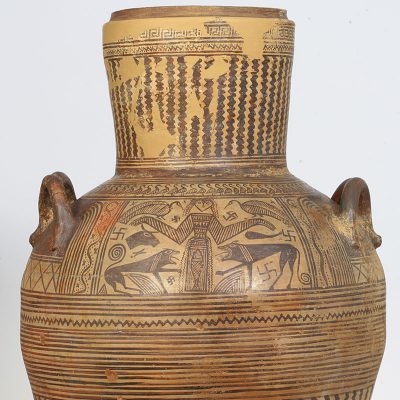 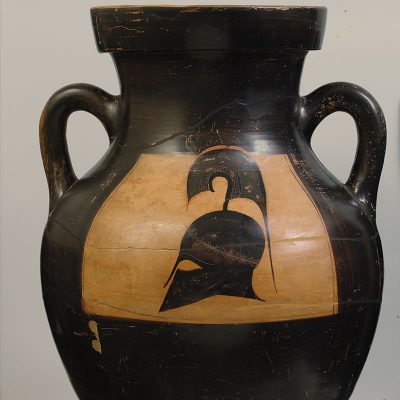 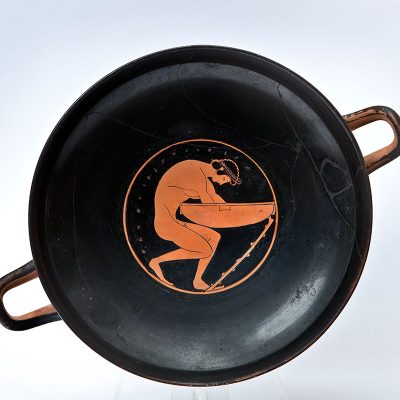 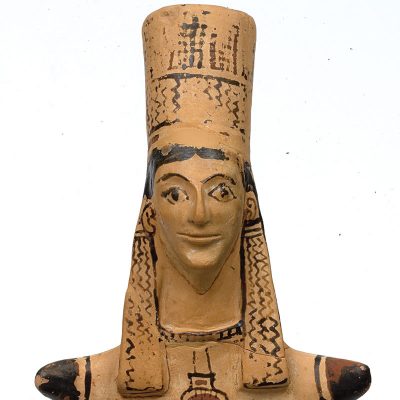 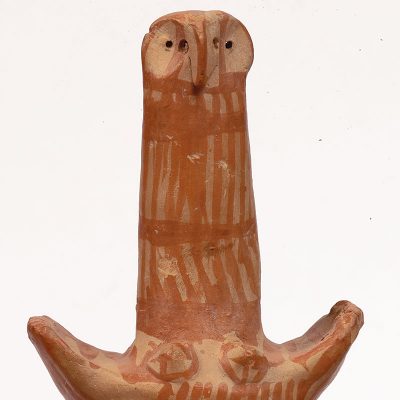 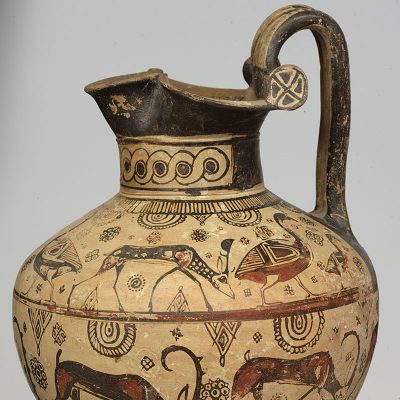 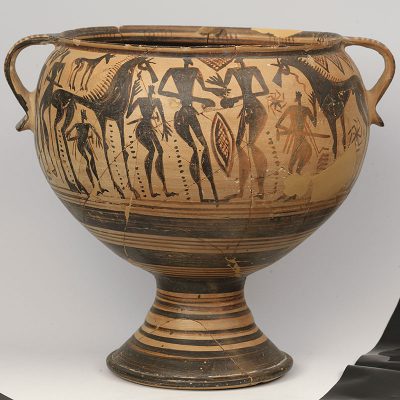 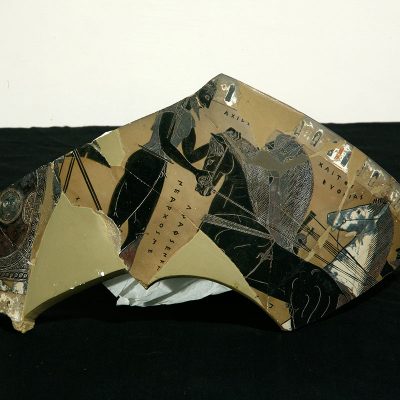 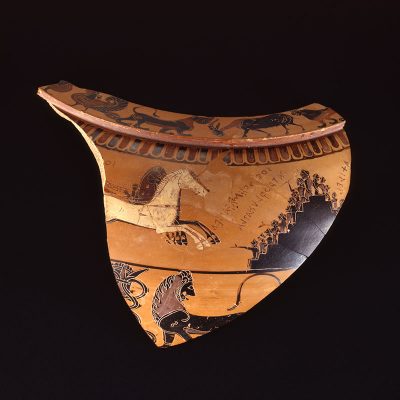 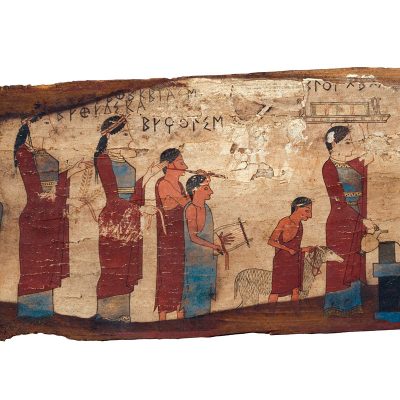 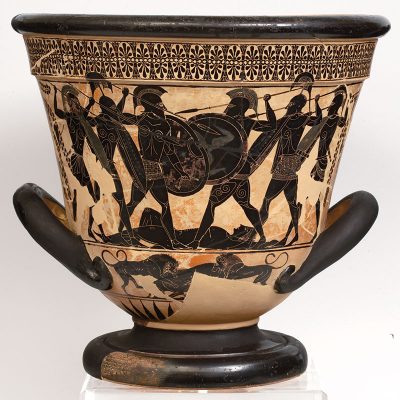