The permanent exhibition of the Collection of Metalwork: fragments of works and objects of minor arts – made chiefly of bronze, but also iron and lead- are displayed in Rooms 36, 37, 37a, 38 and 39 in the north-eastern corner of the Museum occupying 547,50 sq. m in total area. After they familiarize themselves with the manufacturing method of bronze creations (Room 36), visitors are introduced to the development and diversity of metalwork through ensembles coming mainly from sanctuaries of Mainland Greece and the islands (Rooms 36-37), the Shipwreck of Antikythera and the locality of Ampelokipoi in Athens (Room 38). Vessels, tools and instruments elucidate aspects of everyday life (Room 38). Arrowheads, spearheads and javelin heads from the Battle at Thermopylae, but also equestrian and chariot equipment complete the exhibition (Room 39).

1. The First Room (36): The Room has been named “K. Karapanos Room” after the antiquarian nobleman from Epirus who donated to the National Archaeological Museum a large number of votive offerings from the great sanctuary and oracle of Zeus Naian at Dodona. A reconstruction of the casting method of a bronze statuette, stone moulds and figurines that had been left incomplete shed light over the technology of bronze artefacts. The progress from the plain and abstract forms to more naturalistic ones as well as the different styles and workshops are delineated with the aid of individual works (X7647, KAP540), decorative attachments to vessels (e.g. tripod cauldrons X7842) and jewels from tombs (X20226) and sanctuaries (X12831) that date back from the 11th to the 4th century BC.

The pendants in the form of figurines of birds perched on bases of various shapes (8th-7th century BC) from the sanctuary of Zeus Thaulios and Artemis Enodia at Pherae in Thessaly are very characteristic. The oracular inscriptions and decrees, the statues, figurines of deities, humans and animals as well as the vases, vessels, tools, weapons and jewels from Dodona were produced in various workshops and date from the prehistoric to the Roman period (ΚΑΡ 27+16547, ΚΑΡ 24, ΚΑΡ 22, Χ 16546, ΚΑΡ 16727, ΚΑΡ 166). Some of the numerous figurines of animals -mainly bulls (10th-4th century BC)- from the sanctuary of the Cabeiri near Thebes are revealing of the local cult of fecundity (X10555). The bronze statuettes of female and male figures from the sanctuary of Apollo on Ptoon mountain (X7381) date back to the same period (6th-5th century BC) as the marble Kouroi, some of which are displayed in the Rooms of the Sculpture Collection. The bow fibulae with incised representations produced in workshops of Attica and Boeotia served as votive offerings dedicated to remote sanctuaries, as evidenced by the fibula that comes from the Dictaean Cave (Idaion Andron) on Crete (X11765). The warrior figurines from the religious centre of the Aetolian League at Thermos, where Apollo was worshipped, attest to the capacity of the local deity. The figurines of animals and birds from the sanctuary of Artemis Laphria at Calydon seem appropriate for a goddess protector of fruits and animals. As for the rest of the votive offerings (vases, vessels and weapons) these are encountered in many other sanctuaries also.

2. The Second and the Third Room (37-37a): Both larger and smaller sanctuaries of the Peloponnese abounded with votives, mainly during the 6th and the 5th century BC, a time at which the old temples were reconstructed or new ones were built, whereas the cities altered and were embellished with magnificent edifices. Jewels, anthropomorphic plaques and others inscribed with decrees were found at the sanctuary of Artemis Hemera or Lousiatis at Lousoi in Arcadia. Pins and sections of statues (X16173) come from the sanctuary of Hera Akraia and Limenia at Perachora in Corinthia. The metal votives from the sanctuary of Asclepius in Epidaurus are associated with the capacity of the god to heal. The Laconian creations are plentiful across the sanctuaries of the region, dedicated primarily to Apollo (X14789), but also Athena and Artemis, as well as in other places of worship. It is highly possible that local workshops that served the needs of the pilgrims were situated in close proximity to the Arcadian sanctuaries dedicated to Zeus, Pan, Hermes, Apollo, Artemis, Demeter and other deities. Figurines of the dedicators (X13056), usually hard working people, were offered to the sanctuary of Zeus Nomios at Berekla in Messenia). The anthropomorphic plaques and the miniature models of weapons from the locality of the temple of Apollo Epicurius at Bassae in Phigalia and the models of mirrors and vases from the sanctuary of Demeter and Kore at Hagios Sostis in Tegea (X14922) betray the limited financial ability of the faithful. Figurines of Zeus from his sanctuary at Mount Lykaion bear witness to his cult there, whereas other figurines, such as of Hermes depicted as shepherd (X13219) denote the capacity of the worshippers. Impressive for their quantity as well as their quality, figurines of humans (X6178a), gods (X6440), animals, mythological or imaginary creatures (X6159), vessels (X7941), weapons, but also a slab inscribed with a decree (X6442) have been retrieved at the sanctuary of Zeus at Olympia

Equally significant and plentiful are also the metal artefacts from the Acropolis of Athens (vessels used in the sanctuary as well as votives). Figurines in a wide variety of forms (X6447) and vessels of every sort (X7038) filled the popular sanctuary of the naval superpower. Finally, the finds from the islands that acted as bridges between the East and the West attest to the relations between peoples.

3. The Fourth Room (38): During the Hellenistic period larger or smaller bronze works, individual or forming part of compositions were dedicated to sanctuaries, but at the same time decorated privates spaces. They are associated with the venerated deities and also commoners or eminent public figures (KAP16727). They are marked by naturalistic rendering, inner intensity and passion. The statuette of Dionysus from Eurytania (X15209), but also those recovered from the Shipwreck of Antikythera conform to this attitude. From the latter group the Mechanism (X15087) bears testimony to the high degree to which technology had developed at the time, being the most significant scientific instrument of antiquity.

During the Roman imperial period the commissions for works that copied in miniature or modified creations of Classical antiquity contributed to the emergence of important metalworking workshops. It is possible that the entire set of the various statuettes unearthed at Ampelokipoi in Athens were produced in some of the thriving Attic workshops. Deities (X16772), athletes (X16781) and figures of common people are popular themes. The vases (such as the hydriae X18775, X15246), the household equipment, the medical tools, the mirrors and the musical instruments shed light on essential aspects of everyday life.

4. The Fifth Room (39): Accessories of equestrian equipment have been unearthed at horse burials, as grave goods, but also in places of worship. Bronze fragments arranged around a modern armature reconstruct a Roman chariot from Nicomedia at Bithynia (3rd-4th century AD), where the palace of Diocletian lay. The bronze and iron arrowheads, spearheads and javelin heads from Thermopylae, where three hundred Spartans and seven hundred Thespians bravely opposed the numerous Persian troops (480 BC) complete the permanent exhibition of the Collection of Bronze Metalwork. 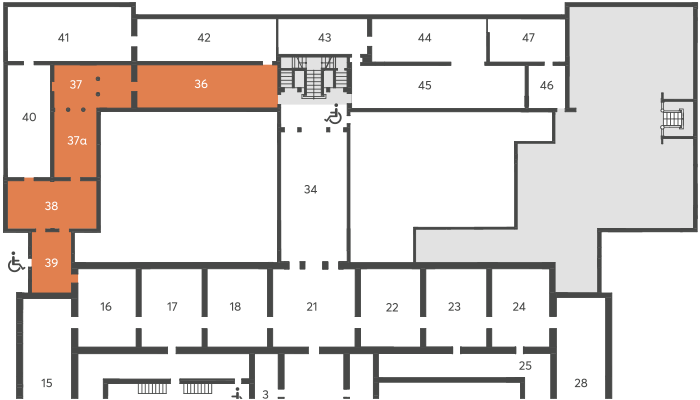 The creations of bronze metalwork of the Classical period (5th-4th c. BC) cannot compete in quantity with their archaic counterparts. […]
Newsletter sign-up