During the two pre-Christian centuries the Roman conquerors stripped the Greek sanctuaries and cities of works of art. Statues and luxurious metal vessels were transferred to the West in order to decorate the Roman residences or impress the crowds in the “triumphs” (magnificent entrances into Rome) of the Roman generals. However, in Greece the interest in the arts endured even after the Roman conquest. The bronze workshops continued to be prolific as the Greek works of art were very popular among the eminent Roman citizens.

Portraiture dominated the art of the imperial period. The bronze equestrian statue of Emperor Octavian Augustus, retrieved from the sea between the islands of Euboea and Hagios Eustratios (X23322), and the statue of Iulia Aquilia Severa (X23321), consort of Emperor Elagabalus (218-222 AD), from Sparta are truly impressive.

The influence of works produced by the renowned artists of Classical antiquity, such as Polykleitos, Myron and Lysippos, becomes particularly manifest in the so-called classicizing sculptures of the Roman period. Indicative of this tendency are the bronze statue of a young male figure (X26087) that was confiscated in 1998 from Saarbrücken, Germany and was repatriated in 2002, many of the bronze statues unearthed in the Athenian neighbourhood of Ampelokipoi (“Ampelikipoi Hoard”) and the statuette of Apollo Lykeios (X15234) from Patras.

The production of metal artefacts associated with the private and public life, the occupations, education, the sciences, the world of women (e.g. household equipment, vases and vessels, medical tools, styluses, musical instruments, jewels mirrors etc.) continued throughout the Roman period. 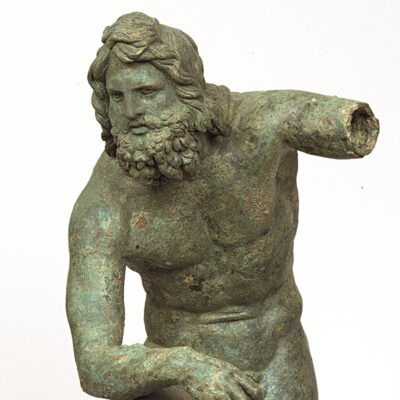 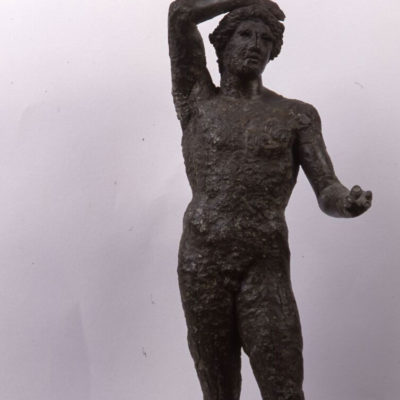